I Am Williamson County: Jeni Housley 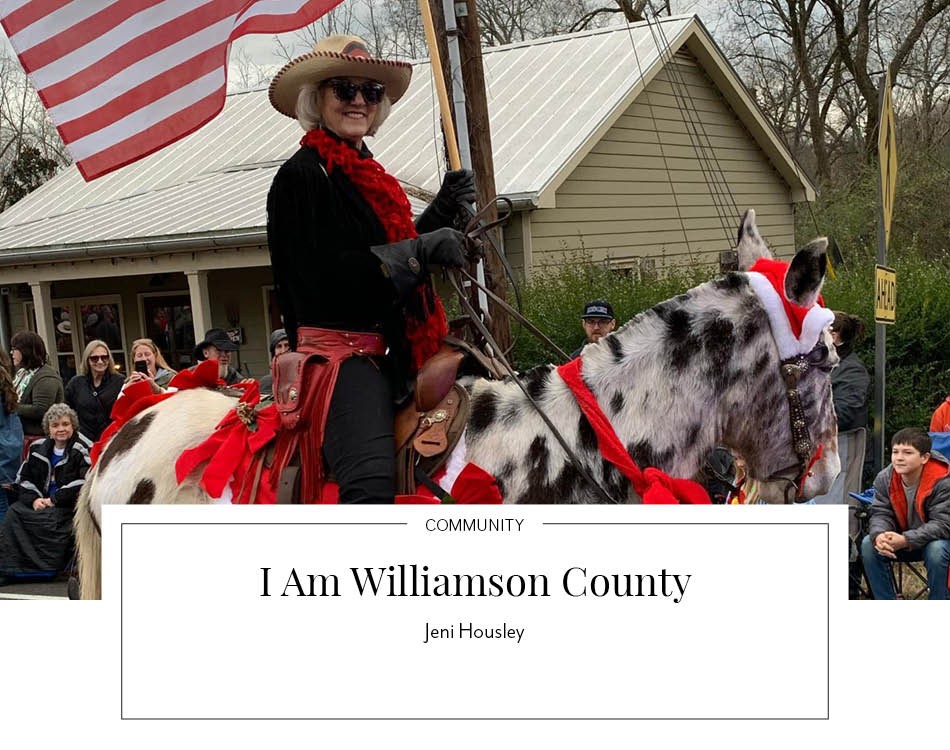 Jennifer (Jeni) Starr Housley is a very familiar face throughout Williamson County. Especially in Leiper’s Fork. Jeni and her beloved eye-catching mule, Hooch, take trips in the area often - riding throughout the area and this time of year, participating in the Leiper’s Fork Christmas Parade. They can be seen carrying the American flag during the parade, decked out in red Christmas attire.

Jeni and her family have lived in Williamson County for over forty years, with three generations living locally. Involvement in the community runs deep, and we wanted to share more about this unique lady and her horse with our readers.

YW: What is it about WC that makes it home?

JH: We chose this area because it was family-oriented, rural and scenic, had good schools and people were friendly… We all say “hi” and introduce ourselves and become friends for life. We like the feel of Franklin… We could have horses and other animals in our neighborhood. We could ride trails in the woods and also ride to town with Leiper’s Fork people. Franklin had city and country…the best of both worlds.

Being in Williamson County has enabled me to create, relate, grow, and enjoy life with friends and family.

YW: What community organizations are important to you?

JH: Community involvement is very important to me, and I just realized Hooch has been involved in all of my local organizations as well! Hooch and I have been involved with Saddle Up!, where he would attend many events and let kids ride him. He is very attentive to special needs and children in wheelchairs. We have been active with the Heritage Foundation of Williamson County events - riding at PumpkinFest and Dickens of a Christmas. I have been a cowgirl during the Rodeo Parade.

Friends of Franklin Parks and Harlinsdale has been another love of mine. Hooch has helped out the Old Glory Daughters of America group by carrying the flag at the 2020 Veterans Day Parade at Harlinsdale Farm.

YW: How long have you  been a part of the  Leiper’s Fork Christmas Parade, and how did that begin?

JH: Ten years ago, Laura Musgrave, director of the parade, recruited Hooch and me to carry the flag in the Leiper’s Fork Christmas parade. The parade is so much fun! The town is alive with incredible energy and creativity. You never know what unusual floats, costumes and elements you will see.

YW: Tell us about Hooch.

JH: Hooch is a Tennessee Mule that I’ve had for thirty-one years. He’s won numerous trophies for his appearance, conformation, disposition, and equine abilities. But, what makes him so special is that he loves people and loves to please.

Hooch is a media star! He has been in calendars, featured in USA Today, and has been on the local news. I have ridden him sidesaddle in the Rose Bowl Parade, Kentucky Derby Parade, opening parade of the Cowgirl Museum in Fort Worth, and performed in Branson at a show. He has also been a part of the Wilson County Fair and Tennessee State Fair.

Hooch and I love to make people smile and enjoy experiences. Hooch has helped me make friends with all kinds of people in many places - and all of this started here in Williamson County. Hooch gets mail and has people come to visit him and take pictures. I am so grateful for all of the friends and supporters in our journey. I love this quote I heard from a man who studied

Hooch at an event: “How long did it take the Lord to think up an animal like that?!”

YW: What is your “day job,” and how does it involve  your creativity?

My animal entertainment has given me additional joy over twenty-five years - I have loved sharing my mini donkey and mules with many wonderful people. 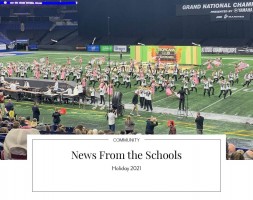 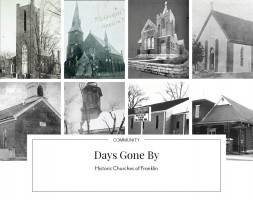 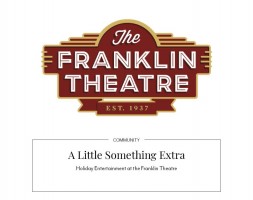 A Little Something Extra: Holiday Entertainment at The Franklin Theatre 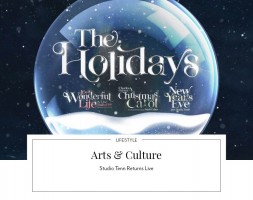 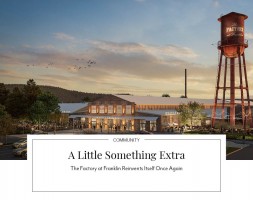