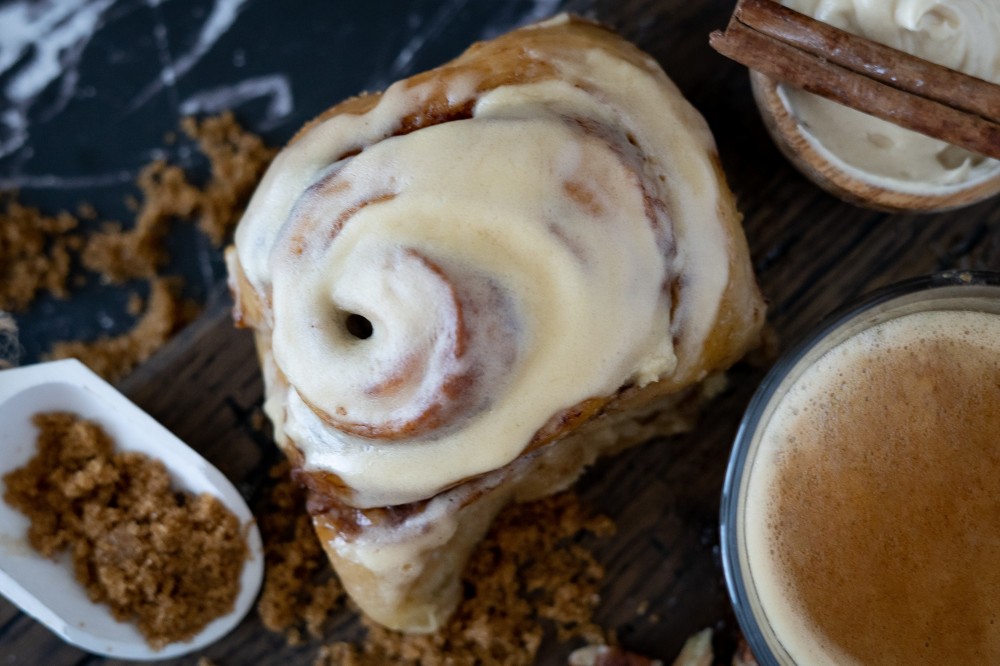 Step aside, donuts... There is a king of gooey goodness in town that has many locals flocking to grab! I am talking about the cinnabuns offered by Rock N Rollz Nashville, formerly The Z Bakery Nashville. Owned by Christin Cook Zito and Zito, who says he is the man with one name (like Bono), the pop-up bakery has become highly popular in recent months. But, how did this amazing pastry popup begin and just who are the rockin’ people behind it?

“I have been working in the concert entertainment industry for twenty-one years,” explains Zito. “I am a touring production manager and I’ve worked for artists such as Backstreet Boys, OneRepublic, Tim McGraw and Faith Hill, Sia, Josh Groban and, last year, with Ariana Grande. I was supposed to be touring with blink-182 this year. My wife Christin has been working as a freelance Hair and Makeup artist, for over fifteen years in Nashville, for folks such as Hayley Orantia, Dan Rather, Maneet Chauhan, Kid Rock, Nashville Mayor John Cooper, Dan and Shay, Dancing with the Stars, Darius Rucker and many others.” 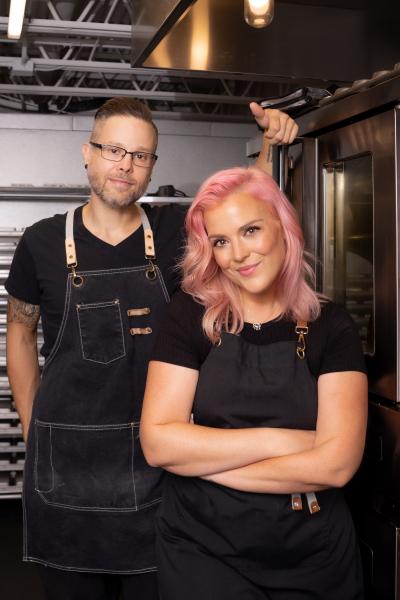 “I have always had a love of cooking and baking and once my tours had canceled for the year, I had a lot of time on his hands. I got into sourdough last year so was able to continue with creative ways of baking with it. Breads, bagels, tortillas...all sorts of things. In April, Christin encouraged me to start sellin my sourdough bread to the neighbors,” says Zito. “One weekend, we decided to use my sourdough to create some cinnamon rolls for our ‘cheat day’ meal where we went off our diet for a day. The rolls were SO amazing...so Christin posted them on her Instagram and all sorts of people were commenting on how they wanted some. That next weekend we decided to sell them to the neighborhood. We sold sixty-three that first weekend. Last weekend was our thirteenth weekend in business and we sold over 1,300 rolls!”

So, is it a secret recipe? Zito explains that would have been a lot easier! “We took bits and pieces of different recipes to start then just started baking and adjusting. It was tough keeping the weight off taste testing all those rolls! Now that we’ve made over 7,500 rolls so far we’re finally getting the hang of it!” They also have incorporated some special rolls during the months, including a Bourbon Buttercream Roll for Father’s Day and a Peaches and Cream Roll for the 4th of July. “We hope to be able to continue doing a special roll for each month,” says Zito. 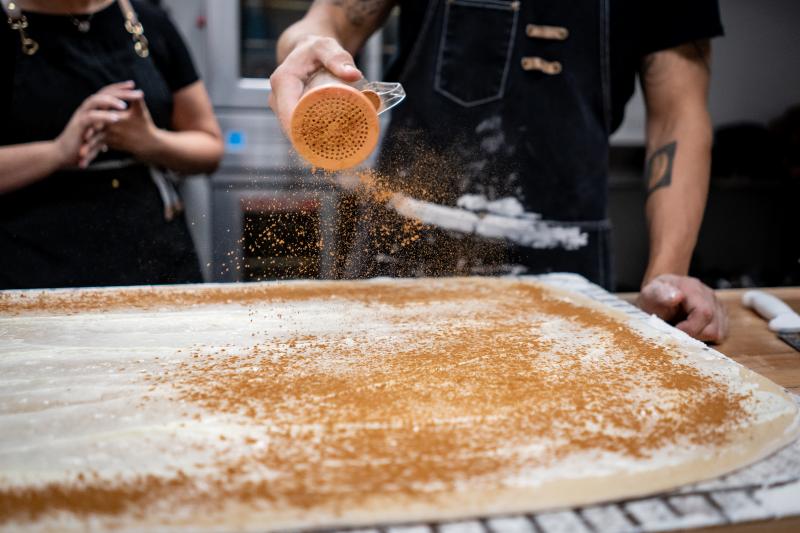 The rolls are pre-ordered and available for pick up each weekend at one of their three primary locations; Saturdays in East Nashville and Franklin, and Sundays in Mount Juliet. They have now also expanded to add The Nations and Murfreesboro. “We don’t have a physical storefront, so our pop-up is literally that, a pop-up tent! Rolls are pre-ordered which is facilitated through our website starting at 5pm on Wednesdays,” Zito says. “Because these pop-up locations have the possibility of changing and are often at a residence, we don’t advertise the address publicly. Once an order is placed, we send a text/e-mail with the specifics for the pickup that weekend.”

Zito says that their biggest obstacle has been keeping up with the demand. “It’s one thing to make eight cinnamon rolls in your kitchen, it’s another to make 800! We’ve gotten a bit of advice along the way, but we’ve primarily had to figure that all out by ourselves. We’re not commercial bakers so learning how to scale to such massive quantities has been a huge learning curve for us. Thankfully logistics and systems is what touring is all about, so those skills have come in very handy in the kitchen! Up until three weeks ago, we were baking in our home, over 700 a weekend, but we recently moved into a commercial kitchen space. My wife also runs a social media management company called Pink Flamingo Social, so that has been a huge asset to us helping to get the word out!”

Why the name change? “The name and logo were designed quickly, so we had a more professional looking product,” says Zito. “As our cinnamon roll business grew, we never really feel like the name matched our mission, product or personalities. We feel that Rock N Rollz better represents who we are and what we do and will be more memorable for consumers.”

Zito and Christin also wanted to partner with a cause that was close to them. “When we started this, we knew that we wanted to partner with a mission that we knew had directly helped touring folks,” Zito explains. “MusiCares has been around since the early 90’s helping musicians and touring crew during crisis. They were there during the tornado, they are there during COVID and they will continue to be there providing much needed assistance during peoples times of need.”

“The touring world was literally shut down overnight. There are an estimated over 12 million people in the entertainment business that had their income drop to literally nothing within a week,” he says. “It’s not just the touring personnel, but also the venues and vendors that support touring. Without any of them, there are no concerts. It is looking highly likely that full scale touring will not be able to resume until next summer at the earliest. For these folks, that is over a year without their primary source of income. We need music lovers to help support companies like ours that are pivoting to support themselves. We also need music lovers to educate themselves on the challenges we’re facing, they can read more at liveeventscoalition.org.”

“We want to keep getting the word out about our rolls and MusiCares. We want to keep growing our business and keep putting our rolls into people’s bellies because in such a tough time, people need to hold onto things that make them happy,” he explains. “We know our rolls are delicious and we love hearing that, but we also love to hear how we’ve inspired others to pivot and move forward! People need a story to rally behind to encourage them to find creative ways during a crisis and we’ve heard from dozens of people how we have been the push they needed to start their new adventure.”

Rock N Rollz currently does a pop-up location on Saturdays at Head Springs Depot, from 10am to 12pm. They only have a limited supply available for walk-ups, so people are highly encouraged to pre- order. Learn more about Rock N Rollz Nashville at rocknrollznashville.com. Also keep up with @RockNRollzNashville on Instagram and Facebook. 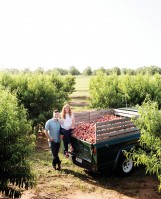 Family Friendly Eatery in the Heart of Westhaven 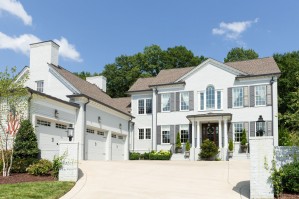 Gracious Convenience and Modern Living in Designer Home at The Grove 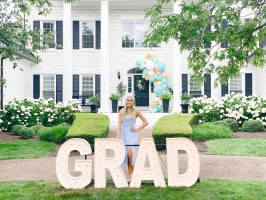 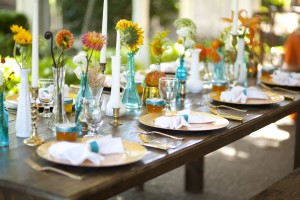